Here is my latest TwinStick Project, based on my Ultra Ulia arcade stick.

For those who might not know, the Ultra Ulia Arcade stick is a chinese copy of the Hori Real Arcade Pro stick, with the difference that it has more space under the faceplate, due to the lack of turbo-home-panel. The home button is just a Sanwa 24 button. This stick is sold as a PC-PS3 stick, but I modded it with the famous PS360+ PCB one year ago.

My plan for this project was to use the same method than with a generic arcade cabinet: one case but with the ability to easily change the control panel.

So the first thing was to get a custom faceplate: a very cool french guy in France called Mr_Big is specialized in cutting metal control panels, so I ordered him this plate with two mounting plates for the sticks: 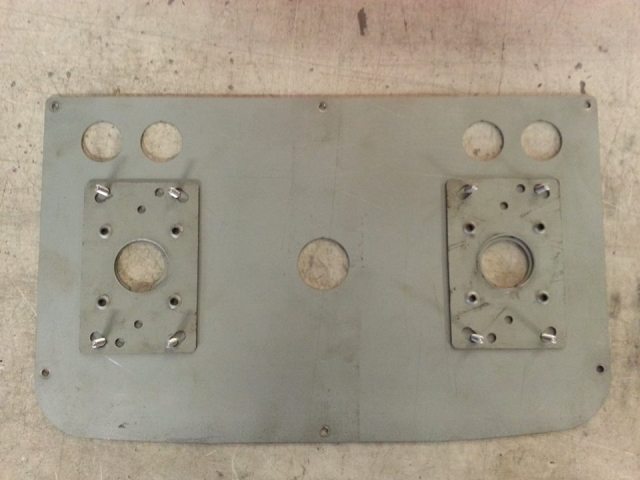 I also cutted a plexi plate to protect the artwork (famous Hori artwork I modified to fit my needs and tastes): 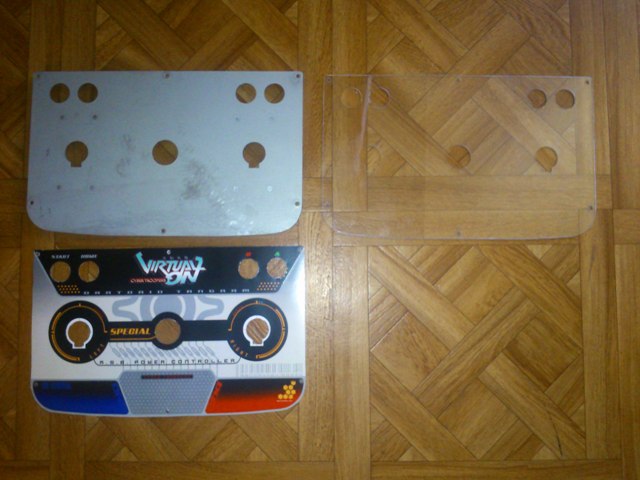 Then, I took the sticks and the PCB out of a Dreamcast TwinStick and mounted them on the plate: 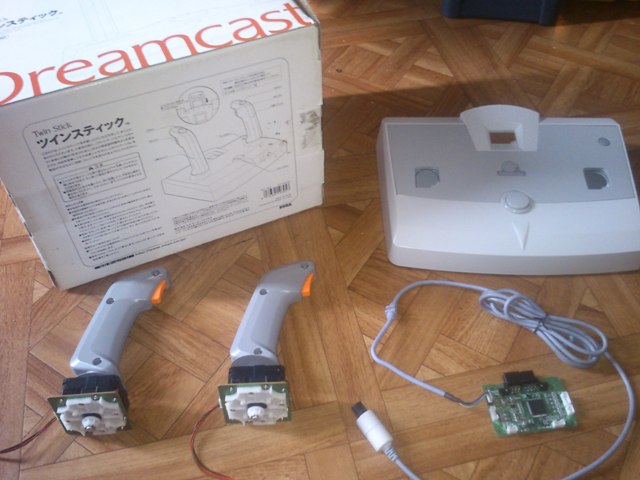 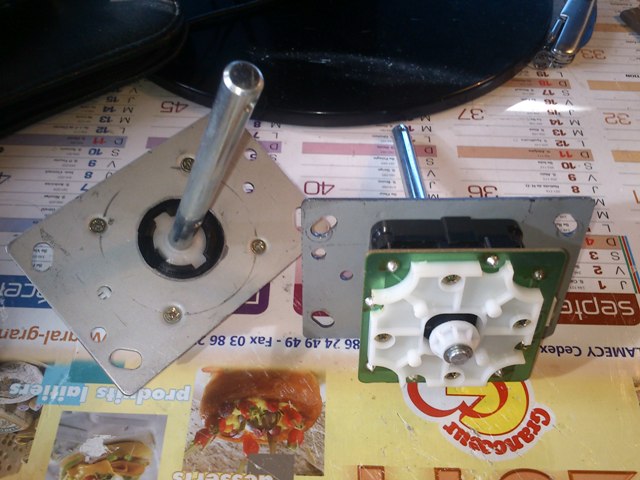 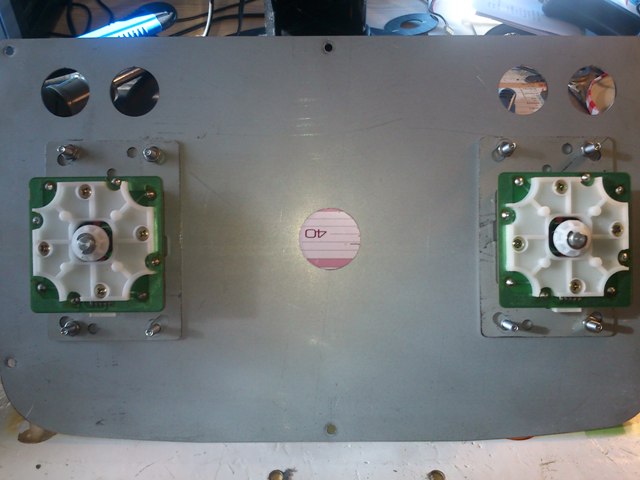 Then comes the wiring.
The idea was to use the alternate hook-up connector of the PS360+ to easily plug or unplug the entire control panel: 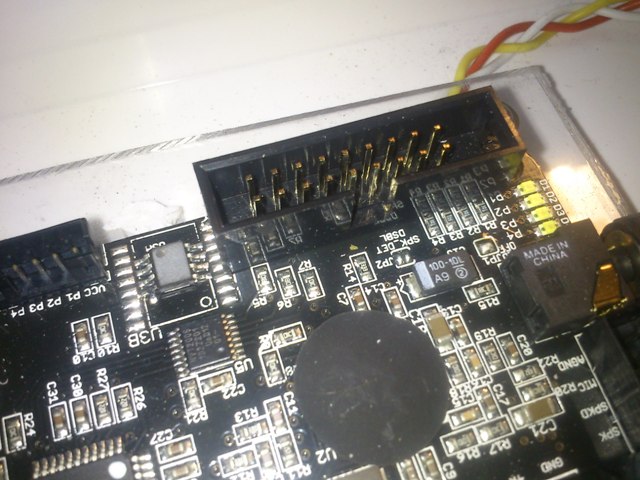 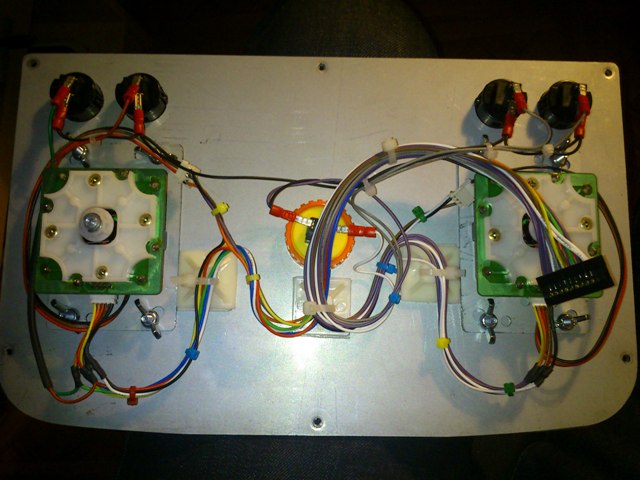 I recently bought another Saturn TwinStick to fix my "Virtua TwinStick", and to get some spare parts, but I took the famous black handles for this project: 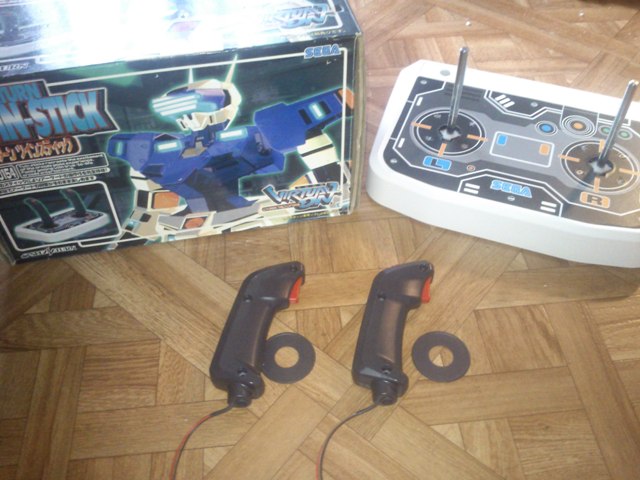 I also replaced the Trigger microswitches by some new longer ones in order to have a quicker activation of the weapons, it feels great !
Pictures then and now: 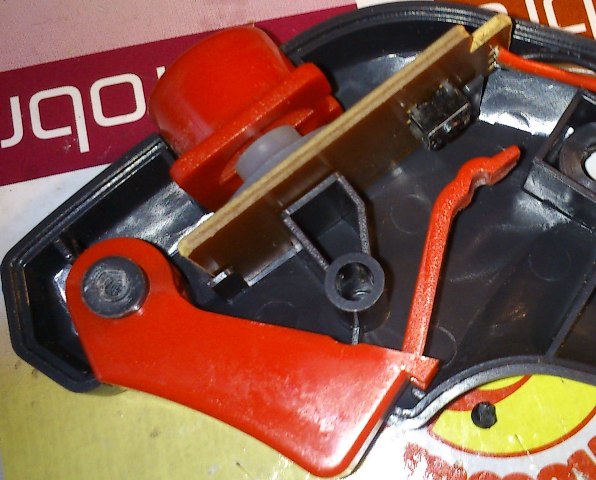 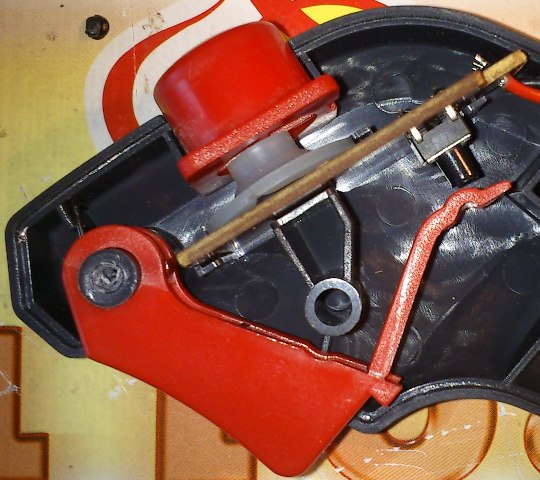 Now since VOOT on XBox 360 does not support split screen, I still want my TwinSticks to be Dreamcast compatible. The PS360+ are DC-compatible, but recognized as Arcade Sticks, so I had to use the Dreamcast TwinStick PCB and modify it to fit the same kind of connector as the PS360+. I also installed a built-in VMU since I had enough space within the stick. The Dreamcast cord is detachable using a DB9 connector installed on the back of the stick. There is so much space in that case that the DC cord can also fit inside it ! 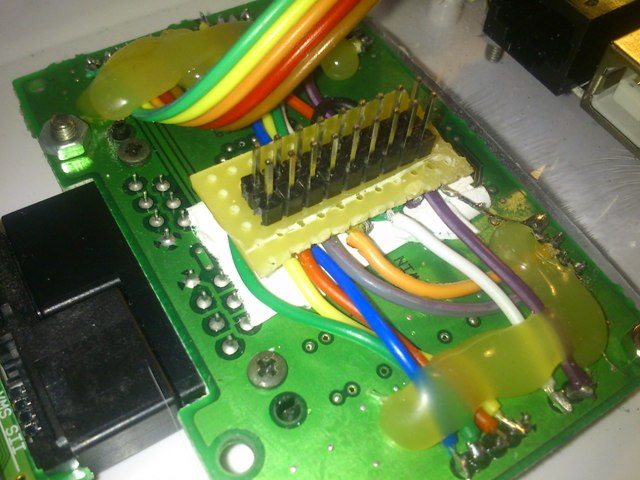 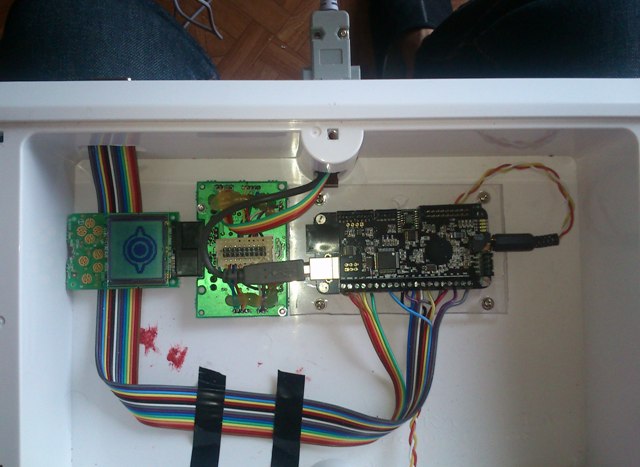 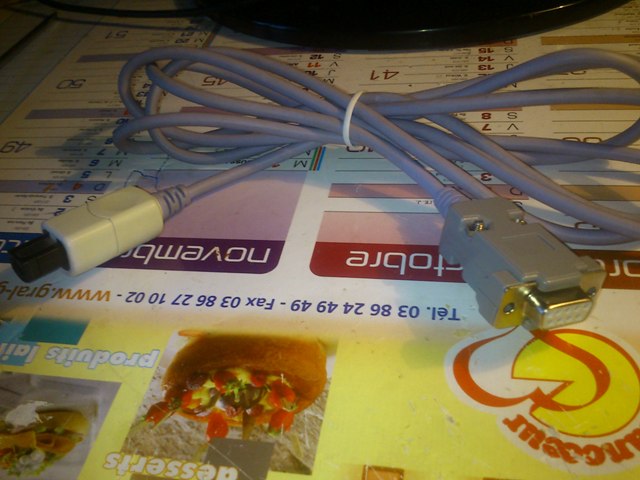 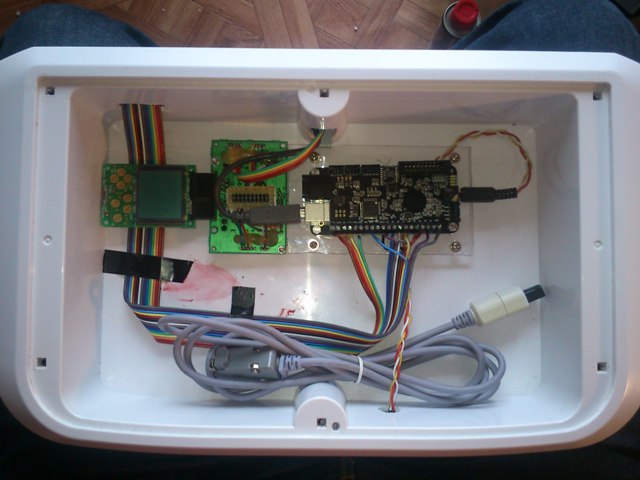 here are the pictures of the baby ! 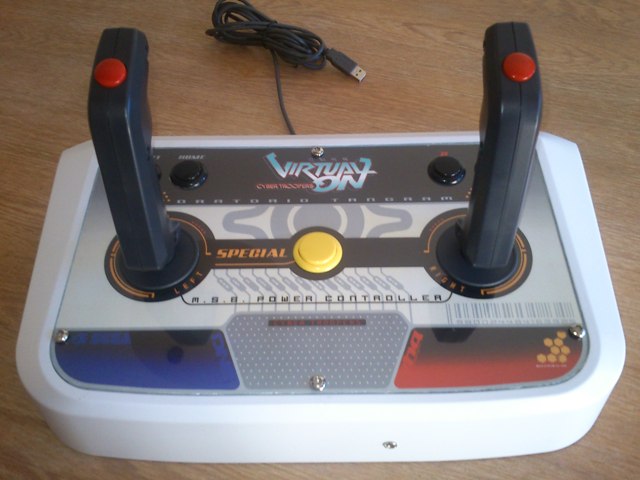 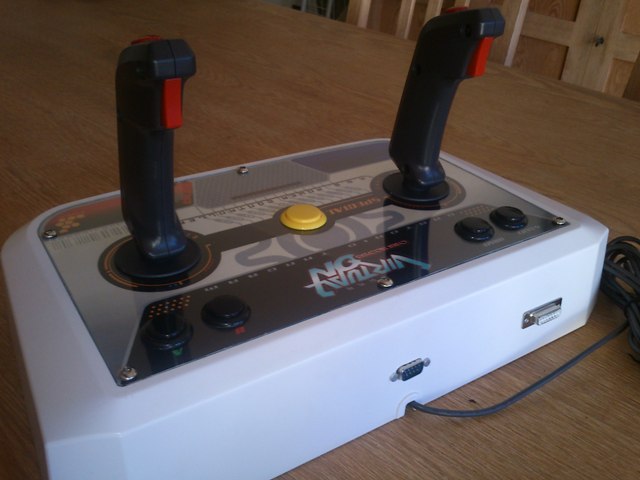 Mission accomplished ! only 6 screws and a connector to remove to change an arcade stick into a Twin Stick, and vice versa ! 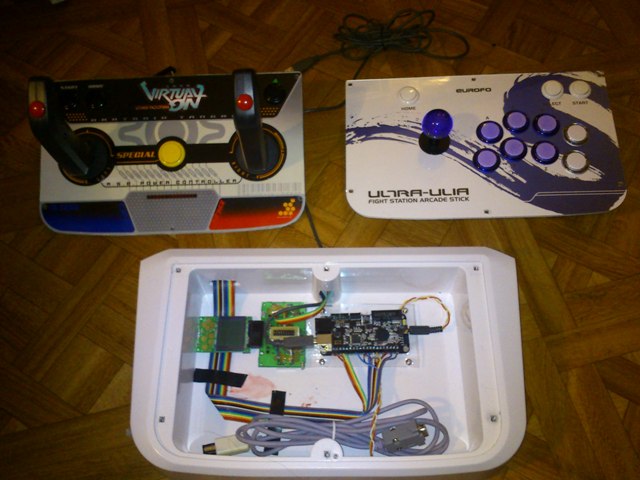 And here is my little "home arcade cabinet" with it.

(It usually comes with another kind of "Twin Stick") 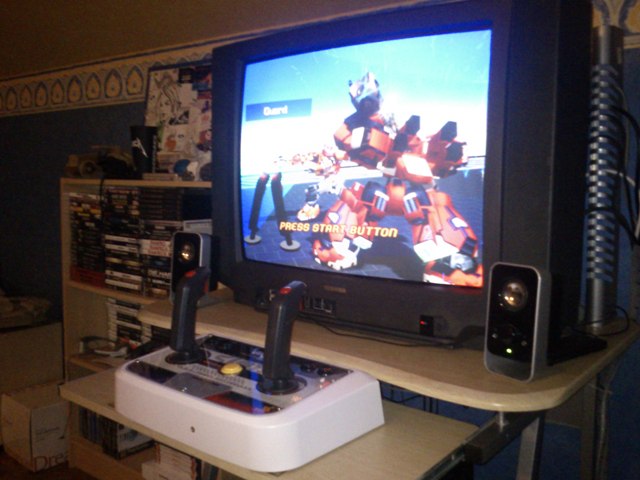 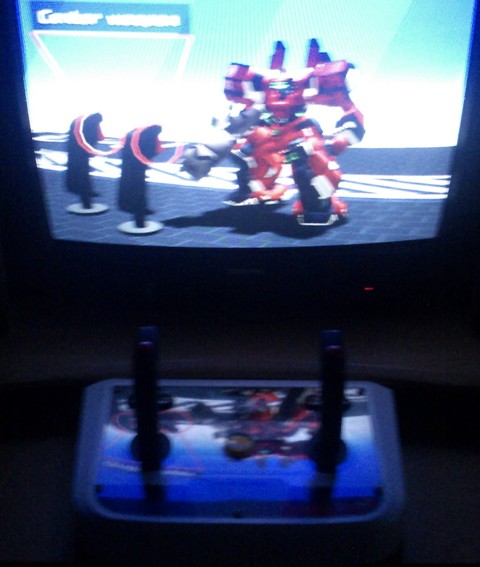 This baby is far heavier than the official DC or Saturn ones, it does not move even a bit when you play with it on your laps or on a table. It does not even lift when you suddenly dash backwards. Replacing the trigger microswitches also is a great improvement. All that makes it my favourite TwinStick...so far

There is something that has been bothering me for a while. I never played VOOT or any Virtual On game on arcade machines, I discovered the game on Dreamcast with the controller before buying my first Twin Stick. I know I'm not the very best VO pilot ever, but dammit I love this game, its gameplay and its intensity !

But even if I love playing with TwinSticks, and it helped me a lot improving my skills and knowledge of the game's mecanics, I must say that performing Crouching attacks is obviously harder with a TS than by pressing a button on a controller, even more when it comes to Crouching Turbo attacks that turn into latteral-dashing attacks. The very climax is when I want to perform a "crouch+special" with Grys Vok, Stein Vok or Angelan, and it misses 95% of the time due to the position of the Special button (it's easier with a Dreamcast Twin Stick though).

That's why I'm thinking about adding shortcuts buttons on my handles, so that it would only take a button to crouch or crouch + turbo. I hesitate because some part of me thinks it's cheating, but I find it terribly unfair that people playing with a controller do have these kind of shortcuts, and I belive the "Arcade gameplay" should prevail. I also hesitate because it's gotta be kinda hard to cleanly add buttons on these precious and overly cool handles.

I've spent my day trying to find a way to add a crouch-button on a handle this is the best solution I've found:

It wil be wired as the Right Stick "clic" Button, and set as the "cancel jump" button in the game config. I'll test this tomorrow.

The button is small and discrete, so it does not ruin the handles design and ergonomy; and pretty hard to press, so you can't press it accidently !

Fredo wrote:The very climax is when I want to perform a "crouch+special" with Grys Vok, Stein Vok or Angelan, and it misses 95% of the time due to the position of the Special button (it's easier with a Dreamcast Twin Stick though).

The reason behind this was the firmware of the PS360+ and the way its macros are configured. Basically, pressing Back + one button simply cancels both of them. As crouching implies pressing Left and X, pressing Special cancels the X, so Crouch Specials simply can not perform.

I wrote to the Developper Akhishop Custom and they answered me to downgrade the PS360+ to ver 1.1VA.hex, and it works fine now !

Okay, I got my "crouch button" wired and it works just fine !

Here is how it's wired: 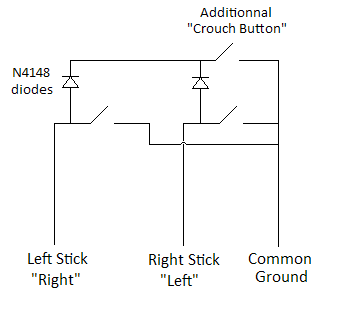 It is not wired as a stick "clic", bus as a shortcut to trigger the two inputs at the same time. I choosed this method so it would work on Dreamcast too, and as my X360 PSU just died, I can say it was a good idea

You need the two diodes so that each button can work independantly. Without diodes, all buttons are wired together and the three would act as a "crouch button". Any diodes will do, but those are the cheapest.

Very useful when it comes to crouch-turbo attacks and crouch-cancel CQC combos !

Nice work.... I'm not sure where you're located but if you ever find yourself in NH you're welcome to stop by and play my OMG arcade machine. Sadly none of my friends are interested in playing against me.

twistedsymphony wrote:Nice work.... I'm not sure where you're located but if you ever find yourself in NH you're welcome to stop by and play my OMG arcade machine. Sadly none of my friends are interested in playing against me.

I live in France, but thanks for the invitation

.
At least you have a VO arcade nearby, I haven't seen one in France... Not ever

About the OMG Logo, yeah, I know. In fact, without a logo, I kinda felt there was something missing here so I tried to fill it with a VO-related logo. I did many tries with my modest Photoshop skills. The two best options I found was the Force logo or the OMG one, I did not manage to find a good OT one in HD, and it also has another Tangram logo in addition of the one already present on the overlay, it did not fit to me. The OMR logo also has this nice old-school design, with flashy colors and futuristic fonts, it kinda fits pretty well the spirit of the whole Virtual On series.

Anyway, thanks to the plexi, I can change the artwork very easily, in case if I change my mind