UPDATE: we now have a new date set for the tournament. we had to push it back due to the renovations going ton to the arcade. 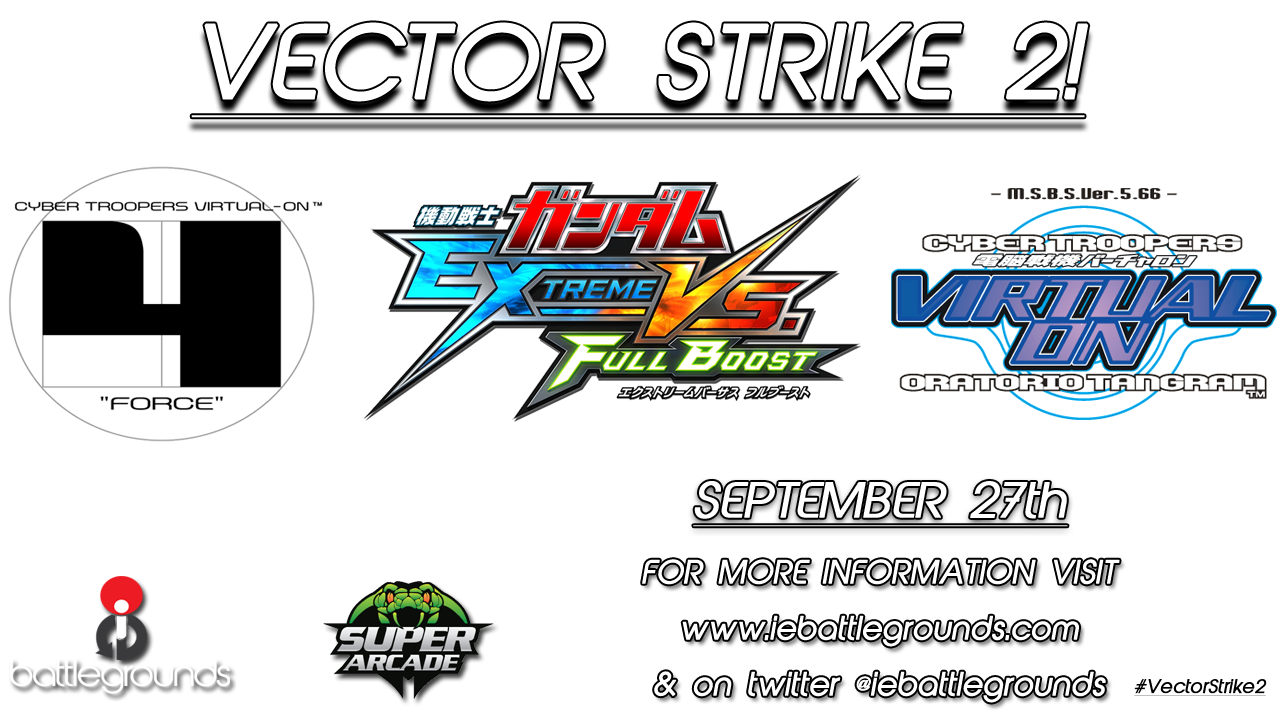 On September 27th we will be hosting the second Mech event that will consist of:
Gundam Extreme Versus Full Boost
Virtual-On Oratorio Tangram
Virtual-On Force

Looking For A Partner?
we also created a Facebook page for the event too
if your looking for a partner for 2v2's be sure to visit the page and post up
you can find that page here: https://www.facebook.com/events/1645191452373133/


Gundamn EXVS Full Boost Rules:
Mobile Suit Gundam Exteme: Vs Full Boost will take place on the PlayStation 3(PS3) console.
2v2 team format
Double elimination
Matches will be best 2 out of 3 games
Each game is 1 round
2 out of 3 games for preliminaries, losers, and winners finals.
3 out of 5 games for grand finals.
Round timer: 240 sec
Stage Select: Side 7 only
Winner cannot change character but can change burst type
Loser can change character
No game breaking exploits, bugs, or anything that causes the system to crash
DLC released after 1/30/2014 is banned

Virtual-On Force Rules:
Virtual-On Force will take place on the Xbox 360 console.
2v2 team format
Double elimination
Matches will be best 2 out of 3 games
Each game is 1 round
2 out of 3 games for preliminaries, losers, and winners finals.
3 out of 5 games for grand finals.
Round timer: default
Stage Select: random select
winning team cannot change VR
losing team can change VR


Please Provide Your Own Controllers

online brackets will be available at iebattlegrounds.challonge.com

live stream will be provided by us at http://www.twitch.tv/iebattlegrounds

and make sure you follow us on twitter for updates also https://twitter.com/iebattlegrounds
Last edited by temjinalpha on 14 Aug 2014, 17:08, edited 6 times in total.
Top

I can't make it that weekend.

Previous engagement scheduled on tournament assigned day that I can't get out of. It is still early ComMando. Alot of the Heavy's could use a extra week to secure their travel plans. I propose moving Vector Strike 2 to the 30th. A day in which team Inflamed Virtuaroid could appear. Also the Labor Day holiday would give those Heavy's a planned extra travel day. Everyone could be a winner! Eh, anyway... Thank you for your consideration.

I can make it on the 30th. I already have plans for the 23rd.
MentholMoose
Top

Shot heard across the bow! One person's misery is another's reason to celebrate? Now, see a little light at the end of the tunnel. A glimmer of hope rises. The fat lady hasn't sung yet. No one said Last Call ! Yeah, yeah ... May be possible for team Inflamed Virtuaroid & this website host Mentholmoose to appear at Vector Strike 2! But we wait for now. Official announcement, if so will come.

SuperArcade.jpg
(52.77 KiB) Not downloaded yet

updated the first post with the new date for Vector Strike 2. it will now take place on September 27th 2014.

Thanks for the update. I will plan to attend.
MentholMoose
Top

I will also attend this! I was unable to attend the first one.

Since I am coming all the way from Washington, D.C., it would be great if anyone who is in driving distance could also attend so I can meet you in person. Also, I am a married man now, so my playing time has been limited and will continue to be, and this might be the only time I am able to "get away with" this. I hope to see you there!
Top

Cool... new ringers are showing up for Vector Strike 2! I have a family thing I'm doing on date of VS2. Sorry, I won't get to this one. Let's just say, "we cut the fat." I just am hoping I able watch live. At worst will need to see the stream archive on IEbattlegrounds. Guess I'll have time concentrate on getting better at this, my favorite game series! VS3... Inflamed Virtuaroid will return!
I wish all that competes in VS2, will do their best!
@VOTwinstick on Twitter / VOTwinstick on Twitch & Niconico / VO-MC / Temjin from Green Hills to Jupiter!
Top

ohh man! only 4 more days to go, cant wait for the tournament. also this Friday ill bring 2 setups with me in case anyone want to practice before the tournament at super arcade.
Top

temjinalpha wrote:ohh man! only 4 more days to go, cant wait for the tournament. also this Friday ill bring 2 setups with me in case anyone want to practice before the tournament at super arcade.

Cool, thx! Myself and Schooly D will be there, and I'll try to round up some other folks.
MentholMoose
Top

The tournament was a lot of fun! I have to give a huge thanks to temjinalpha (@TemjinAlpha on Twitter) for running it and handling the stream! I tried commentating for the first time and really enjoyed it! I'll do it again next time is nobody minds.

The venue, Super Arcade (@SuperDojo), is really great after the recent renovation (and it is still being improved). The new casuals setup is simply perfect for using Twin Sticks. The tables are absolutely rock solid.

The turnout for VOOT unfortunately was lower than expected, however, the games were all high quality. People weren't rusty like last time. Since there were only 5 people, we had a round robin. The top three were:
Schooly D - undefeated / 4-0
MentholMoose - 3-1
PhantomPhotonX - 2-2

Most games were really close. I couldn't do much against Schooly D, but I put up a good fight with PhantomPhotonX and just managed to take the win.

Photon doin' work with his Temjin, was taking mental notes the entire time. Great show guys, too bad about the turnout.

The games were a lot of fun, and it was great to play against Menthol and Schooly in person! The games against Menthol were extremely close. Too bad for the ridiculous flight delays and low turnout. Next time, let's make it even better! We discussed having a side VOOT tournament at the SoCal Regionals, which should be in the February-March timeframe, so you'll be able to get your fill of not just VOOT, but other fighting games as well! I would gladly go again if there is enough interest.

Let's hope I can talk my wife into going to CA again. Maybe she will even come with me next time.