Last night i encounter a problem with the sticks. The twinstick's 15pin D-Sub wire must be bent at a certain angle or else the R-weapon will not work

Firstly, congrats on the mod.

Secondly, quite possibly the wire is broken internally or the connection to the D-sub is dodgy, it doesn't need much to lose contact. I suggest redoing the connections first and if that doesn't fix it, use new wire.
Top

Secondly, quite possibly the wire is broken internally or the connection to the D-sub is dodgy, it doesn't need much to lose contact. I suggest redoing the connections first and if that doesn't fix it, use new wire.

hey dreamcaz.. thanks for the tip.. now i use yellow-black wire for the R-Weapon instead. So far so good..i guess the problem is fixed

MentholMoose wrote:You think that's strong?? You should try the arcade sticks!! Anyway, for removing the e-ring on the arcade sticks, I first push the spring down enough to grip the e-ring with needle nose pliers. Then, with the panel on the floor and the stick horizontal to the floor, I use one hand to hold the actual stick very firmly to prevent any movement, and the other hand to grip the pliers extremely hard and pull straight up. For reinstalling the e-clip, you just have to do you best to compress the spring enough to use pliers for getting the e-clip back on. It shouldn't be that hard since the e-clip will hold the spring down even if it's only partially on, and you can use pliers to carefully snap it back in place.

Also, be extra careful to lubricate everything, including the shaft. Various plastic parts slide up and down on the shaft, and even this relatively slight movement will destroy them quickly if there isn't enough lubricant. I actually forgot to do this the other day when cleaning my arcade sticks, but I noticed it immediately so there was no damage (I just had to completely disassemble, lubricate, and reassemble them again

Thanks for the tips. I had no trouble removing the clips, it's the reassembly that's the problem. I'll get there though, I didn't want to push hard on the actuator so I'll try compressing the spring. (if I can get in there

This is the step I'm stuck on now. Did you get it back on eventually? (assuming you have email notifications on, and the same address after 10 years, lol) I took my left side stick apart to clean and lube, and I can't seem to push the actuator down far enough. I assume the flat part of the spring catch/stopper should be pointed toward the spring? (unlike the DC twin, there's no top hat part, so it can be inserted either way). I have the slightly humped side pointed toward the stick (because I assume the hump helps it pivot in the hole). If I have it backwards, I guess that could conceivably make it harder to put back on? Maybe? LOL

Oh BTW the outer diameter of the SS spring catch is 15mm, and the hole size is 6mm. 2mm thick at the edge, and about 2.16mm at the center (the hump). Yay for calipers!

I tried using the round part of a small wrench to push down on it (I wrapped middle/upper part of the actuator with a small piece of masking tape to prevent damage) , small enough to stop at the top of the actuator, but even with that I can't seem to manage enough force/leverage to get it down below the slot, so I can re-clip it. I even removed the plastic gate/restrictor plate, so it's easier to get at the actuator.

I decided another key thing is talking both grips off, so when you smash the living hell out of it, to try and get the clip back on, you're only putting pressure on the tops of the metal shafts, not the elderly plastic grips....plus it gives you an even surface (I have a piece of carpet on my work bench, which helps keep the top tip of shaft from sliding when I have the controller upside down and am pushing on the actuator). If you remove the 2 lower screws in the grip (along with the nuts and the locking washers) but leave the screw by the triggers in, you can slide the whole grip off the shaft in one piece.

The spring is so stiff, I don't think the actuator actually touches the gate, just the switches, but I lubed the inner square of the gate just in case (for when I put it back on).

I'm afraid to do the other one now. 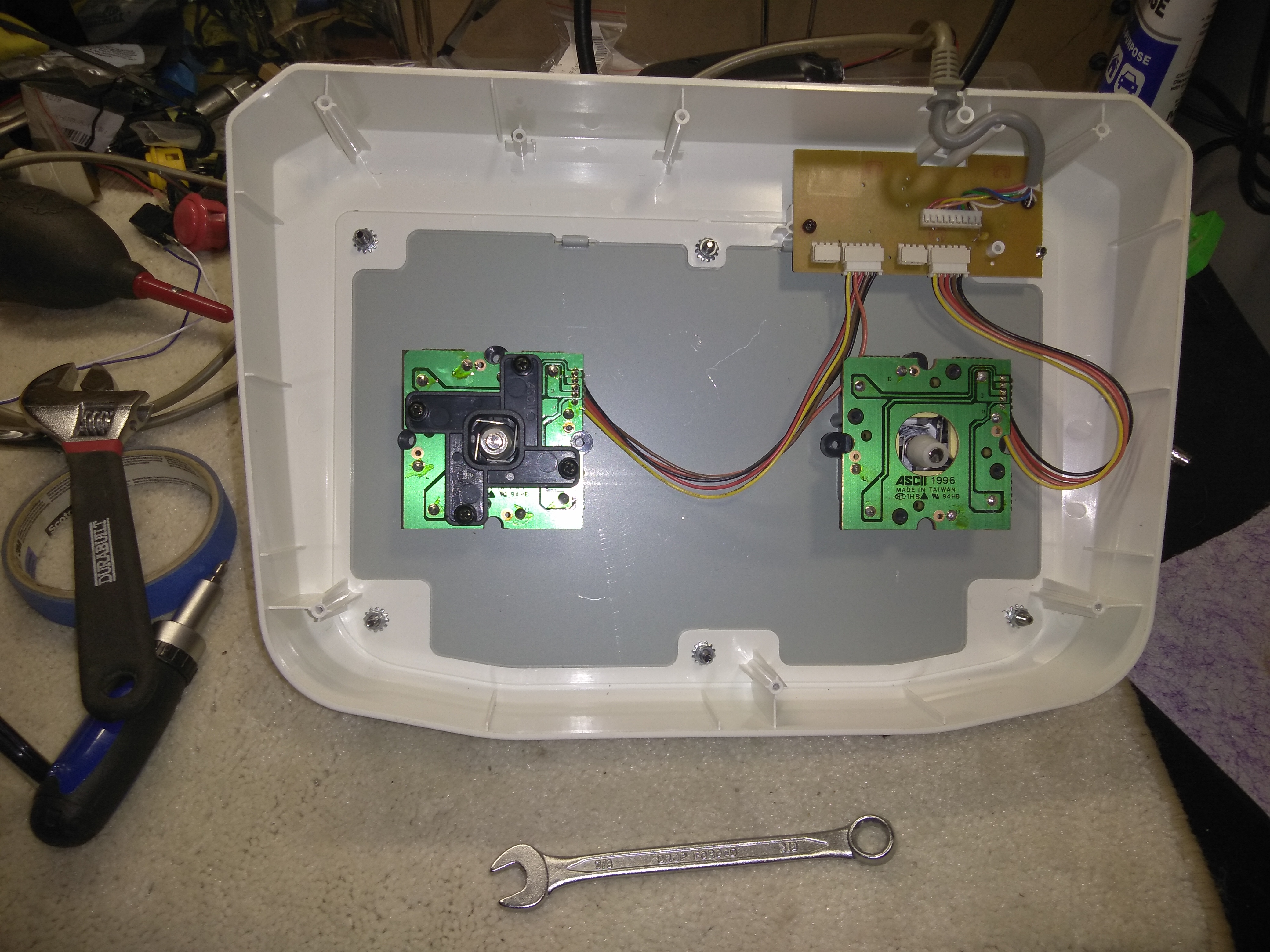 Hi, yes I still have the same email address, lol.

From memory I think I had to push really hard down & eventually I could get the clip on. Sorry, that's about all I remember, it was so long ago.
Top

From memory I think I had to push really hard down & eventually I could get the clip on. Sorry, that's about all I remember, it was so long ago.

I discovered the trick was a flat head screwdriver. I had tried it already and it didn't work...then I did some googling of するツインスティックの (twin stick) along with "repair" and some other terms I'd put through Google Translate, did an Image Search, and just kept looking at pictures until I found a picture of the inside of a Saturn Twin stick. I would then click into the web page and run google translate on it. After a couple tries, I found this:

Which showed someone doing the same thing I had tried, but with a much beefier screwdriver. So I pushed down on the actuator with my wrench in one hand, and the screwdriver with the other, and finally managed to wedge the tip in there, and then levered the screwdriver handle down slightly, and got the clip started in the slot.

You can see the video, with all the details and tips, below. Now I'm happily VOOTing away with my Saturn twin stick on Xbox One!

I forgot to mention the molywhatsits lube in the video, but I'm going to add it to the description at least.
Top