The Dengeki article Gematsu was referencing: We'll get a fourth weapon this time related to the pilot.


There is another blog that has more information, claiming there will be some playable version at the TGS 2017. Below is the gematsu writer from last time (he brought you “stealing downs”) running through the blog with google translate. Notice how he can’t even spell Sleipnir right, as well as the quality translation like “grudge curse assassination Virtuaroid.”

Girly bal means now I can play bal. On the other hand I am not sure angelan is confirmed yet. Feiyen is essentially confirmed so no worries there. 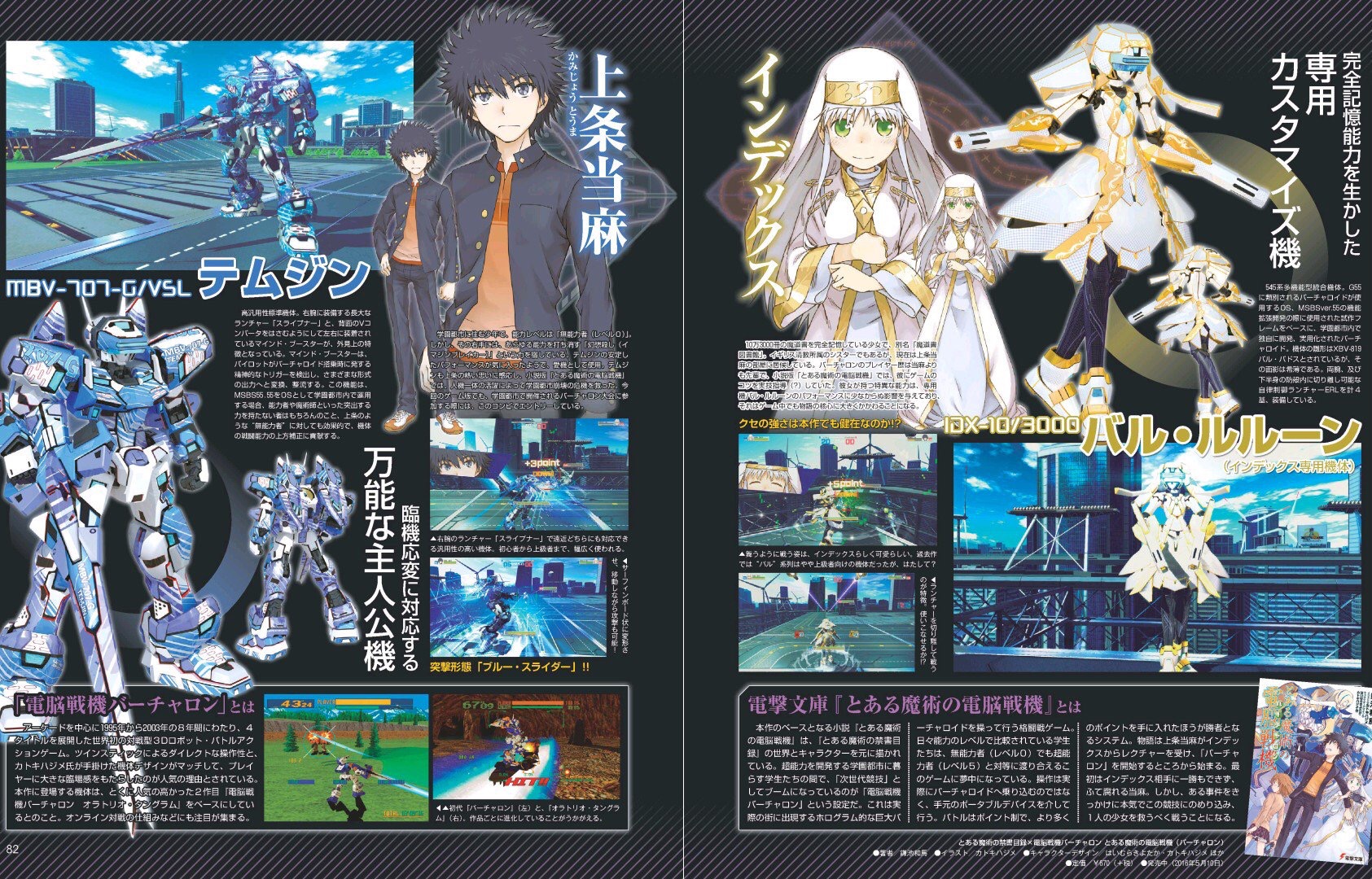 Saw this on 4chan.

The light novel will get a manga adaptation this fall.

I randomly noticed that the Virtual-On Matrix book series has similar pictures of Angelan without clothes, and one of Fei-Yen from only the back. But it's not exactly the same pose, and that particular picture seems to only be in the book Shamanic showed us. It seems to be one of the more rare and difficult Virtual-On books to get.
Top

http://dengekionline.com/elem/000/001/588/1588770/
New Dengeki Online article with some in-game screens showcasing the HUD. There are also descriptions of new system mechanics including two different control schemes, but I don't want to trust machine translations too far.

Points system clarification makes sense, and anti-runaway mechanics have been a core point for every game since VOOT. However it has to be done carefully so that it does not seem too artificial. It also has to be done correctly or it won't have the intended effect. For example my survival team battle proposition appears to discourage running away, but in fact should have the opposite effect.

If not attacking loses points, this would have no effect on how Grys-Vok runs away (missile and napalm curtain). Temjin could still run Shamanic style by throwing bombs into obstacles. Cypher/Angelan could jump high and do a worthless air attack (hey I'm shooting) but otherwise fly away as usual. Fei-Yen could just fire pea shooter to appease the judge (hey I shot 30 times at the wall it's not my fault the other guy won't run into my shots).

I'm not sure this game needs an anti-runaway mechanic as it has been reported to possibly support 3 vs 3. Also if points are based on counting knockdowns that could screw up the game balance against VRs like Bal who have a hard time knocking people down, or like Raiden who hunt for a single, huge damage hit.
Top

Also if points are based on counting knockdowns that could screw up the game balance against VRs like Bal who have a hard time knocking people down, or like Raiden who hunt for a single, huge damage hit.

There is a green bar [ST] bar on top of the [HP] bar in the screenshots. What if [ST] stands for stun? Imagine it working like your HP bar, but instead of the VR blowing up when the gauge reaches 0, it guarantees a knockdown. It would solve the balancing problem you mentioned. It would also explain the need to see your opponent's gauge in the HUD.

Sure it makes no sense, but neither does a lot of things in this project. Besides, it wouldn’t be the first time we got 2 different gauges (V-Armor). Or maybe I am hilarious wrong and this works completely different. Who knows what they're thinking these days.

Yeah, anything Virtual-On got my interest, so this is no different.

Also, hi everyone, I'm (kind of) back, been busy with life and whatnot.
I'm now VO:F ready, bring it on!
VR: All of them.
Top

The stun bar you imagine already exists in VOOM, VOOT, and Force. However it is invisible in all 3 games so people tend not to talk about it. It's the reason why a VR might stagger backward or fall down after taking a certain number of low or medium impact hits in a short time period. The invisible stun bar recovers with time, so low impact hits like Fei-Yen walking RW typically can only stagger them back but not knock down.

Now that you mention it though, my theory is that the ST and HP labels are backwards in the current version of the game. At the very least, it seems like the green bar is the important bar, because Touma's team is whooping Misaka's team in all the screenshots. And in one of them, Misaka's team is both dead, and it says Fatal Down, and the green bar is the one that is gone.
Top

Found these off a Famigeki tumblr page. 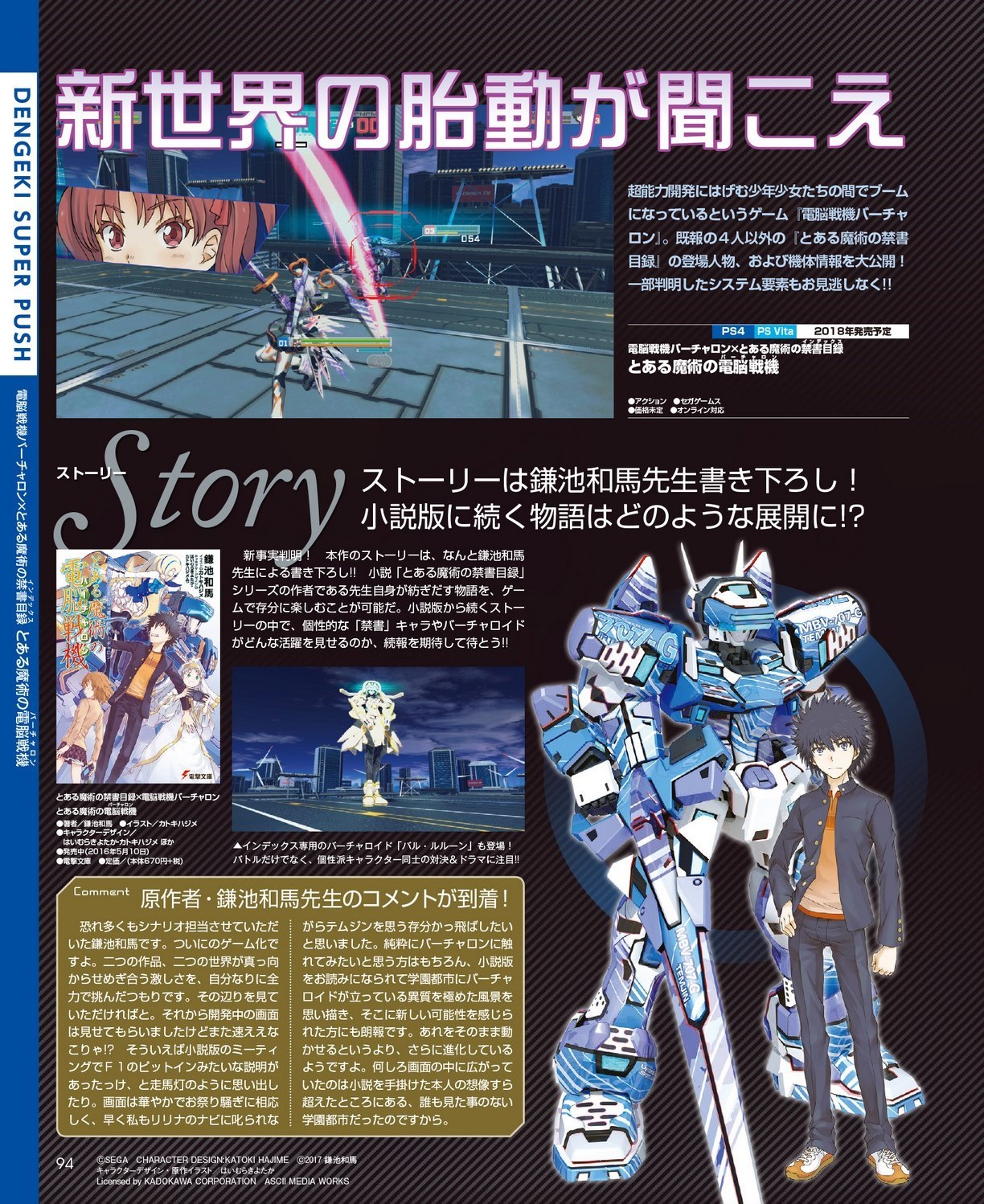 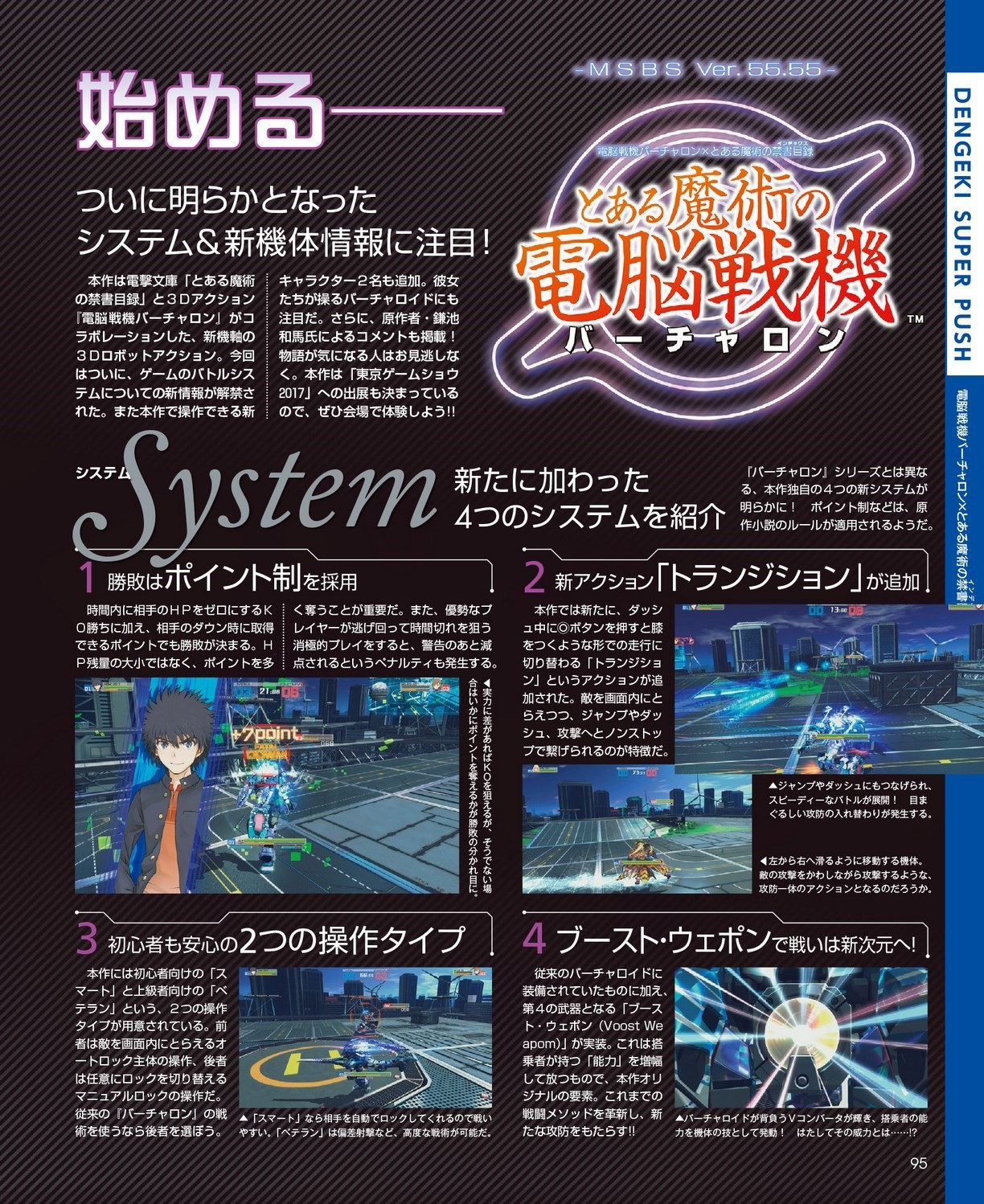 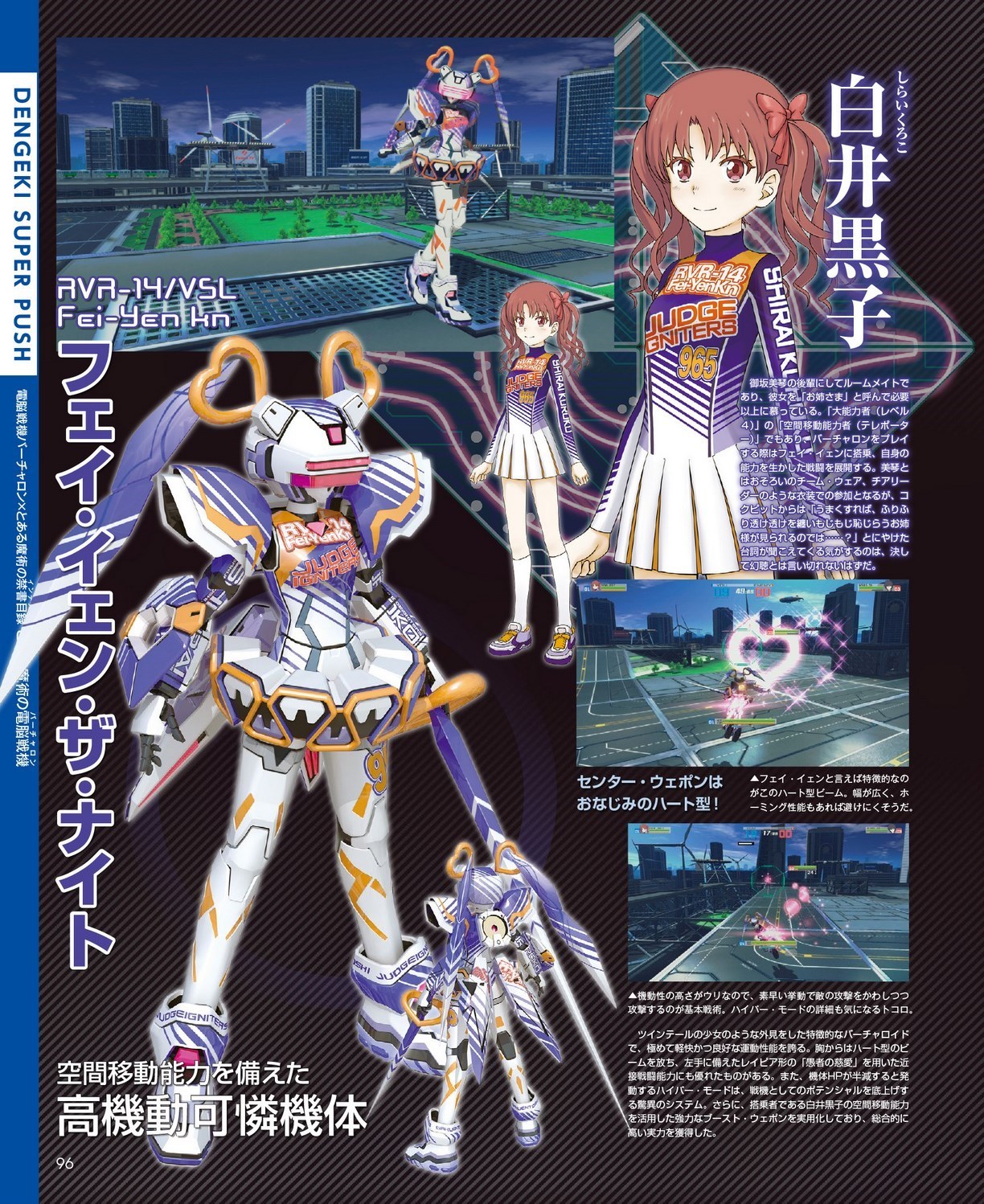 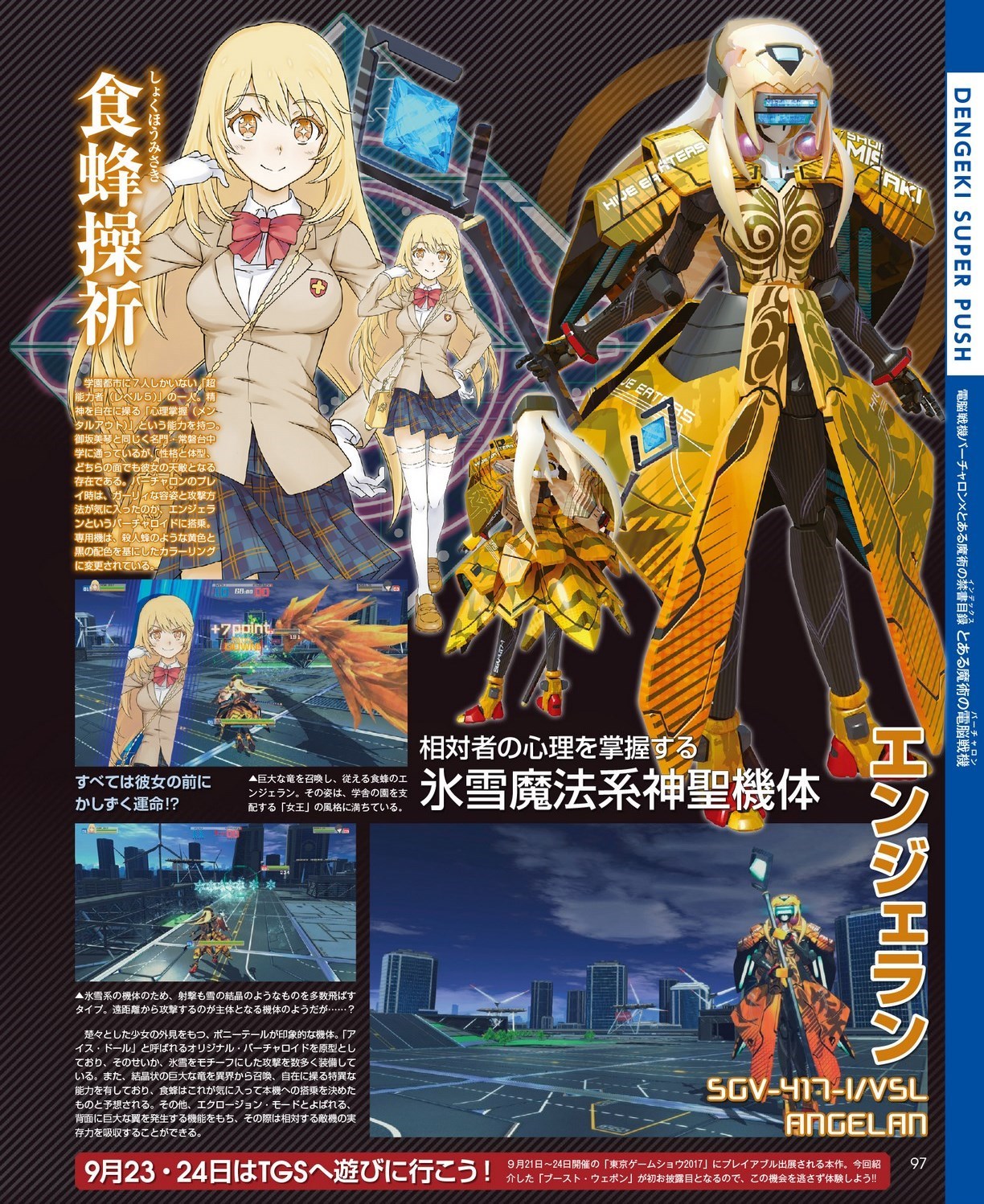 Varryo said he's on my team because our VRs have the same color.

I like the color scheme but I'm hoping you can use the more traditional VOOT appearance too. I'm a bit worried because Force didn't support custom coloring and there wasn't even a regular pink Fei-Yen (unless you count the hidden data one).
Top

February 15, 2018 - both platforms have limited editions.
Game will also be shown on Dengeki and Sega's streams on different days during TGS:
http://gematsu.com/2017/09/tokyo-game-s ... edule#sega 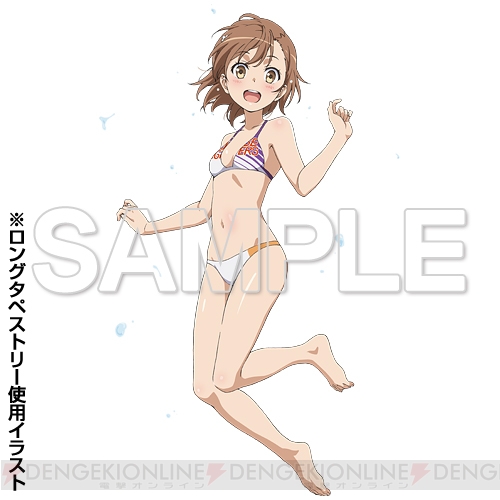 Back after a full 3 years away from VO...imagine how surprised I am when this pops up on Youtube for me and it's OT-based gameplay? WOOOT!

Bummer that we aren't getting any music from Kentaro Kobayashi though.
Top

Gameplay looks great but I don't know if it's VOOT based, it looks halfway between Force and VOOT to me. Which is probably exactly how it should be, no criticism. For example the overall freeze and movement mechanics look like Force (you cannot dash instantly after shooting a standing shot, and note how the dash attacks gradually slow to a stop like in Force). It is just that the speed, both physical movement speed and shortness of freezes, is more like VOOT.

I think that for crouch dashes, you perhaps press crouch first to start your rotation and lock-on, then press trigger at any delayed later time of your choosing. As long as you can't cancel into anything else once you start crouch dashing, it shouldn't be anything too new. It looks like you can cancel a crouch dash into a stationary turbo shot but that's not a major new threat. It looks like you can cancel an air dash directly into a crouch dash, which might be interesting.

I didn't notice any jump cancels. Though useful in all VO games, they were different in each. I kind of like how they work in Force as they are slower and weakened, but they look stupid as you go up and down. If that is the trend they may be weakened further in this game, which could cause it to feel very different than VOOT overall. This would not necessarily be a bad thing.

It's strange that everyone gets that Misaka poster? Even regular editions and not pre-order. I want more than one Misaka poster. Wait, does it only come from Dengeki store?
Top

And the Misaka thing is my bad. I''ll fix the post right now. Bikini Misaka is part of the Dengeki Special Pack, and is sold at Dengekiya. However I'm sure Porc can and will get his hands on it.

The LE content sounds kind of odd ('Everything about', 'Manual', 'Index') because there is a whole book motif thing going on with A Certain Magical Index. Not that anyone here would care. Nor does the Gematsu guy either.